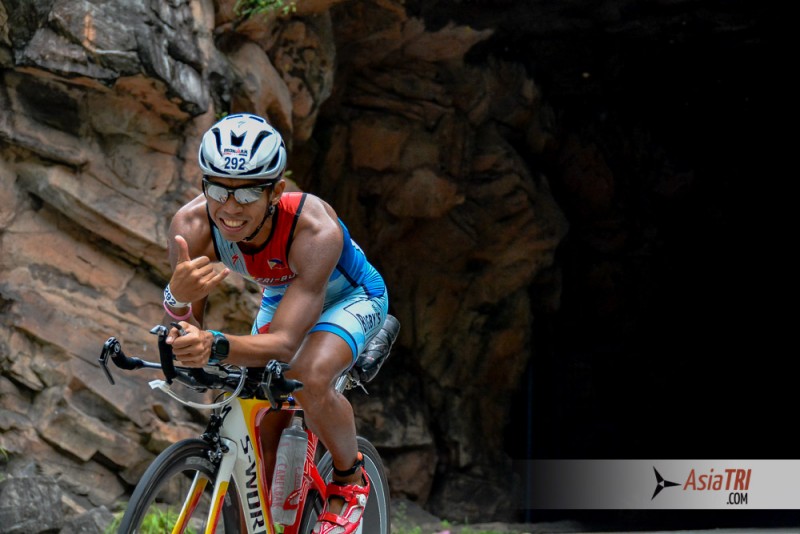 Felipe was the top Filipino at Ironman Langkawi 2014 and finished 5th place in the competitive M30-34 age group.  Jong, as he is known back home missed the Kona slot by only 6 minutes but based on the interview below it is easy to see that he is on track to achieve his goals in triathlon. He is also part of the new generation of high performance South East Asian triathletes. Learn more about this amazing athlete that started to practice triathlon from scratch with no competitive sports background

1. Can you tell us about your background in the sport?

I first heard of Triathlon around 10yrs ago when a friend of mine mentioned that he was into it. I was so intrigued and wanted to try it but since I did not know how to swim then, I eventually chickened out. The thought of swimming 1km in the open water was just too daunting.

Fast forward to September 2009, another friend invited me and even offered to teach me how to swim and train with me. This time, I accepted the challenge. But coming from a basketball (and a few years of badminton) background, I started from scratch for all three disciplines. I bought a cheap second hand mountain bike just to try it out and if ever I won’t like it, I can dispose it easily away. But the moment I did my first ride, first run and eventually my first 1000m straight swim, I just got hooked and I knew there was no turning back. I bought a road bike a week before my first race, November 2009, and got so stoked after the race where I placed 4th in my AG. After 5years of doing triathlons, IM Langkawi was my 50th race and I am looking forward to the next 50, 100, 200 or as long as my body permits.

2. Can you describe a typical training week?

It is only my first year under Coach Mathieu O’halloran but he has been spot on in pushing the right buttons as to what works for me and what does not. My right achilles heel injury, which has been nagging me since last year and significantly limited my run mileage and intensity, fortunately eased up a bit during my build for IM Langkawi so run training was amped up a bit.

*18/23hours per week on average depending on time of year

3. What is your favorite race in Asia and why?

I have to be biased on this. Triathlon is the fastest growing and one of the most popular sports in the Philippines right now but three half distance races stand out: Challenge Half Subic, IM 70.3 Cebu and Tabuelan 111. These are equally well-organized, fun and world-class events but each offers something unique

Challenge Subic or the Challenge “tough” offers a hilly and hot bike and run courses which makes for a grind it out race similar to IM Langkawi. Ironman 70.3 Cebu is known for its very festive atmosphere not only on race day but the whole race week. There is no other race in the world where the whole course is filled with cheering school children, locals, spectators and even marching bands typical of a local “Fiesta” all over the country. Tabuelan 111, organized by the local government, offers a laid back and old school feel. One feels at home and stress-free the moment you get there which allows participants to just concentrate on the race and simply go flat out on race day.

4. What are your best results so far and what are the next goals for you?

My goal is to just keep on improving by the day and hopefully qualify for the ultimate dream race for most triathletes, the Ironman World Championship in Kona, Hawaii, someday. I missed KQ in Langkawi by 6mins. My immediate goal though is to rest up my injury and be healthy for the 2015 season.

5. Which is your favorite training session on each discipline and why?

Bike – long and strength ride. Physically demanding and forces me to stay focused to nail the workout.

Run — long run and T2 brick run. I find it more of a mental challenge than physical, prepares one to finish strong in every race especially in a full distance.

Dubai International Triathlon to be held on 7th November 2014