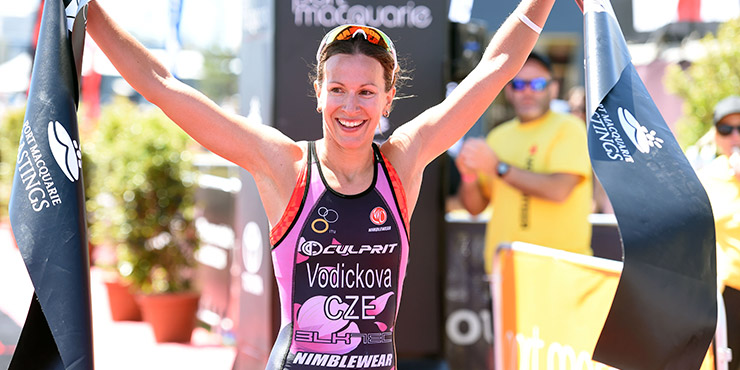 A defending champion was pushed to the wire but an international visitor dominated the women’s race as the Australian summer kicked off in New South Wales.

While the men’s race went right down to the wire Czech Radka Vodickova was in a class of her own leading out of the water, increasing her lead on the bike and running away with victory by over seven minutes.

Amberger knew he needed a big lead off the bike to have any chance of defending his 2013 title. Leading out of the swim he got just what the doctor ordered starting the 21.1km run leg with over seven minutes up his sleeve.

By the half way mark it looked like that wouldn’t be enough as Kahlefeldt had reduced the deficit to just over three minutes.

“I knew seven minutes off the bike would be tough to run down, but I knew I could get close, but it’s a difficult thing to do to run from that far back,” Kahlefeldt said.

In the end Kahlefeldt ran out of steam finishing 33 seconds behind Amberger.

“I was just too far back off the bike, I gave it everything I had, but in the end it wasn’t enough,” Kahlefeldt said.

Amberger produced a carbon copy of his race last year, exiting the water with a 38 second buffer and he laid it all on the line on the bike knowing the faster runners in the field would be coming at him.

A seven-plus minute lead off the bike combined with a 1:19:50 run split was just enough for Amberger to hold Kahlefeldt who ran an incredible 1:12:59.

“This course suits me down to the ground, I love the place and love the support,” Amberger said. “I received amazing support out there, and I’d love to come back every year and race, you can’t beat that atmosphere.”

Since making the switch to IRONMAN 70.3 from short course racing Kahlefeldt has had some great results.

“I love this style of racing it’s a change from the ITU, I’m starting to get better and better, maybe next year I may do a full Ironman, maybe IRONMAN Melbourne or IRONMAN Australia.

Fellow Aussie Alex Reithmeier rounded out the podium in third. Coming off the back of a second place finish at IRONMAN 70.3 Sunshine Coast, Vodickova produced a wire-to-wire win, leading by 19 seconds out of the water. She built on that lead during the 90km bike to begin the run, her strongest leg, ahead by over two minutes. She rounded off her day with a blistering-fast run split of 1:26:25 to secure her third IRONMAN 70.3 victory this year by more than seven minutes.

“I love the non-drafting format of racing, and it’s great for me and really suits my strengths,” she said.

“I was surprised because I expected to be a bit behind after the bike, but I loved the bike course, I loved the hills.”

Next up in the busy summer in Asia Pacific is IRONMAN 70.3 Taiwan on 2 November

Rest Days and Focus: learn how to read your body and think about what you’re doing

The journey has just begun in Myanmar