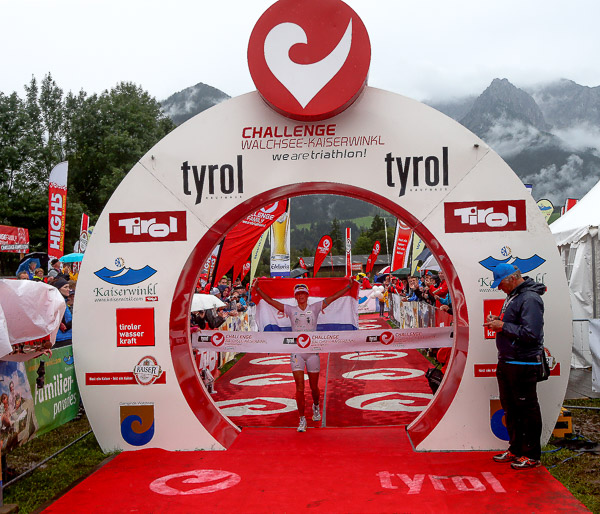 As the fog hung low over the Tyrolean mountains, the deafening start cannon sent the 1,300 Challenge Walchsee athletes on their 113km journey through the Kaiserwinkl which would result in a fourth victory for Yvonne van Vlerken (NED) with Giulio Molinaro (ITA) taking out the men’s title.

Age grouper Lukasz Wojt (GER) was first out of the water in 21:16, a minute ahead of Michael Raelert (GER) and Molinari. It didn’t take long for Wojt to lose his lead to the younger of the two Raelert brothers, closely followed by Molinari. Behind them was a group of six athletes led by Thomas Steger (AUT) that also included Michael Weiss (GER), Richie Nicholls (GBR) and Per Bittner (GER). With the onset of heavy rain, Molinari took his chance started an attack and rode away from Raelert. The outsider soon put a gap of about two minutes between himself and Raelert, who was trying to keep Steger at a distance. By the time he arrived in T2, Molinaro had more than three minutes up his sleeve, having ridden the fastest split of the day in 2:06:15. Michael Raelert, came in two minutes behind Steger into the transition area while Richie Nicholls was nearly nine minutes down.

While Molinaro ran towards the biggest victory of his career in 3:51:34, behind him an exciting battle was going on for second place. By the half way point on the run, Nicholls had run three minutes into Raelert, by 15km he had run up into third place and reduced the deficit to just 1:40 before running into second place to cross the line with 23 seconds to spare, posting the fastest run of the day in 1:10:34.
In the women’s race Caroline Fey (GER) lead out of the water in 24:52, almost a minute ahead of Australian Felicity Sheedy-Ryan. Defending champion van Vlerken was 3:05 down going onto the bike in seventh place. There, the Dutchwoman did what her opponents fear the most. It took the triple Walchsee winner less than 50km to catch all competitors except one. Only local hero Michaela Herlbauer tried to fight her off but she was no match and by T2 van Vlerken had an impressive 4:47 lead. Although she had a big lead, van Vlerken knew there were some strong runners behind her, but she was not expecting the main challenge to come from Sheedy-Ryan. The Australian ran up from fifth and a 9:56 deficit to second, just 1:48 behind van Vlerken, posting the fastest run in 1:20:00. Michaela Herlbauer rounded out the podium in 4:28:20