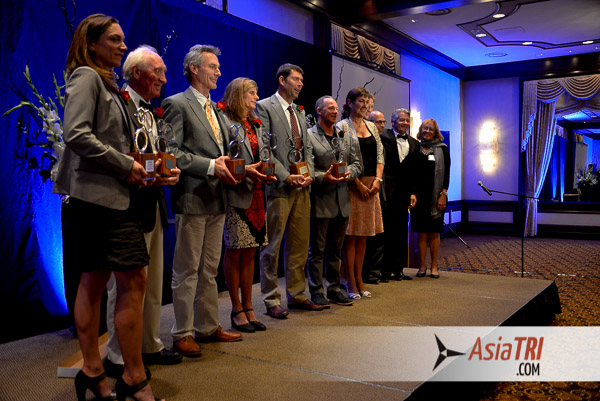 As a part of its 25th year anniversary celebrations, the International Triathlon Union (ITU) today inducted seven individuals into its inaugural Hall of Fame on the penultimate evening of the 2014 TransCanada Corp. Grand Final Edmonton.

“It is a great privilege to induct these nominees into the first Hall of Fame,” said ITU President and IOC Member Marisol Casado. “They set a standard of excellence from the very beginning that was crucial to the development of both triathlon and ITU. Without them, we would not enjoy the global level of exposure and Olympic standard of competition that we have today.”

Following a day of elite racing in which two World Champions were named, the below were inducted into the Hall of Fame: The inductees were narrowed down from a shortlist of 25 individuals in the categories of elite female and male athlete accomplishments, as well as lifetime achievements. Those nominated for the men’s and women’s categories were selected based on the criteria that each has a championship title in one or more ITU World Championships, Olympic Games, Paralympic Games, World Cup Series, and/or ITU World Rankings.

Lifetime Achievement Nominees were selected based on their extraordinary, long-term contributions off the field of play or through an exceptional contribution to ITU and the sport of triathlon.

5 Simple Drills to Improve Running Technique and Warm Up Your Body
March 13, 2019