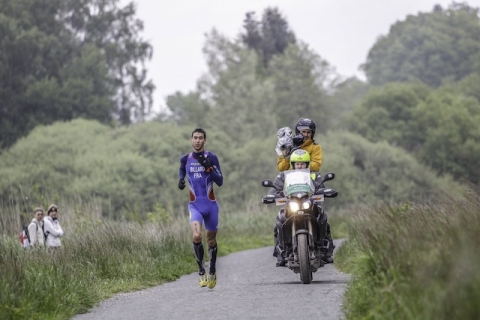 Nearly one year since Camilla Pedersen (DEN) lay in an induced coma after a life-threatening bike crash, she today became a World Champion for the first time at the ITU Long Distance Triathlon World Championships in Weihai, China. In the men’s race, France swept the podium with Bertrand Billard retaining his title as the fastest man across the 4km swim, 120km bike, 30km run course.

In the comeback story of the year, Pedersen’s win ended both a rollercoaster year and a streak of second-place finishes at the championship race.

“It is one year since my bad accident. I have come back and I am speechless,” said Pedersen, who crashed on her bike nearly a year ago and was required to be in an induced coma for the better part of a month.

As a strong cyclist, Pedersen clocked the fastest split of the day to move from the lead of the chase to the leader of the race. With a split three minutes faster than anybody else, Pedersen ran towards the finish line clear of the competition. Despite her healthy lead, Pederson never let up, crossing the line with the fastest time of the day and the second fastest run split.

Although Kaisa Lehtonen (FIN) was more than four minutes down out of the swim, she also took charge of the bike to move into silver medal position. Lehtonen held onto her position with the fastest run of the day to win her first medal at her first appearance at the championship event.

Hewitt, who also tried her hand at the longer distance for the first time, was well positioned for gold or silver but a crash caused the Kiwi to fall behind. However, she managed to hang tough in the race and rounded out the top three.

See also:  Images gallery from the Ironman 70.3 Worlds: the run

France swept the men’s Long Distance World Championships in Weihai with Bertrand Billard retaining his title as the fastest man across the 4km swim, 120km bike, 30km run course. Compatriots Sylvain Sudrie and Viennot Cyril joined him on the podium.

Sudrie, who hadn’t made a World Championship podium since 2011, positioned himself at the front of the pack on the swim alongside Rasmus Petraeus (DEN) and Denis Vasiliev (RUS) while Billard and Greg Bennett (USA) sat in the middle of the field more than a minute back. But with 150km left to cover, the time gap proved no trouble for Billard.

Indeed it was the three-lap bike that changed the race and saw the eventual medallists all but tie up their medals as the only athletes to split the discipline under three hours. Billard was brilliant on the bike, blowing past the nine men that were ahead of him on the swim. Despite his strong cycle, he showed no signs of slowing down on the four-lap run. With the fifth-fastest run split of the day, Billard retained his crown in a time of five hours, nine minutes and nine seconds.

While Sudrie couldn’t keep pace with his teammate, the advantage he had on the swim and bike was more than enough to hold off Cyril and company in a time of 5:11:50.

Cyril, who got to T1 nearly six minutes after the leaders with pre-race favourite Craig Alexander (AUS), made up major ground on the bike to put himself back in the race. Cyril finished off the day with a solid run that clenched the final top spot in 5:15:34.

How to handle the heat and humidity in Triathlon - part 2

8 Exercises To Fit Around Your Day | Strength And Conditioning For Triathlon
January 24, 2019