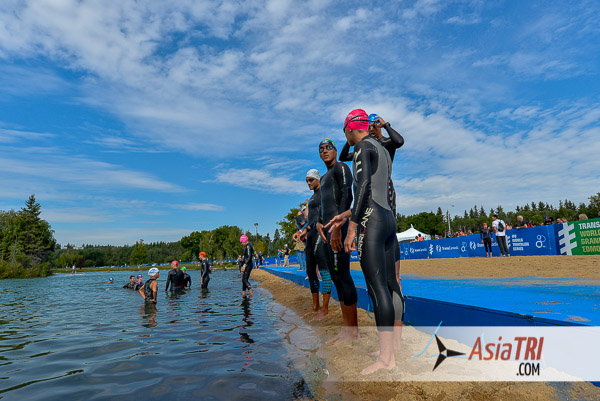 The triathlon world will be focused on Edmonton this week as more than 3,000 athletes, 6,000 visitors will descend on Edmonton for the 2014 Grand Final.

“We have been preparing for more than 18 months and we’re ready to welcome the world,” says Don Lowry, Board Chair, 2014 Triathlon Edmonton Ltd. “Since our successful bid in 2012, it’s been full speed ahead for all staff, volunteers and sponsors to prepare for the coming week. We’re excited the time has arrived and we are ready to demonstrate how Edmonton successfully hosts large scale sports events like the Grand Final.” As the final race on the ITU’s 2014 World Triathlon Series calendar, the Grand Final will attract athletes from more than 73 countries and be broadcast to a worldwide television audience of approximately 45 million in 160 countries. Athletes will compete in several categories include age group, elite, U23, junior, mixed relay, aquathlon, corporate try-a-tri and paratriathlon. The swim-bike-run races take place over five days in and around Hawrelak Park.

Prior to races, Churchill Square will be triathlon central from Aug. 25-28 and will be known as the “Capital Power Triathlon LIVE Site.” The square will be filled with entertainment, cultural displays, Edmonton Symphony Orchestra Performances, a beer garden and a Try-A-Tri Zone for people to try their hand at a mini triathlon, among other festivities.
“Churchill Square is the place to be for Edmontonians leading up the Grand Final races,” says 2014 Triathlon Edmonton General Manager and President Sheila O’Kelly. “We’re excited that Capital Power is able to sponsor the LIVE site to help get people into the spirit of the event and help welcome the world to our city.”

Edmonton is hosting the Grand Final for the second time – it last hosted a World Championship in 2001. The WTS series travels to 7 other cities before Edmonton – Auckland, Yokohama, Cape Town, London, Chicago, Hamburg and Stockholm. Since 2001, Edmonton has hosted 9 International Triathlon Union triathlons including from 2011-2013.

Stay tunned on AsiaTRI for exclusive content, straight from Canadá.

ITU Worlds starts with Aquathlon races on this wednesday

Video > Riki Shinozuka: the future of Triathlon in Malaysia